A History of NHW SA

A History of NHW SA

WORLD PHOTO DAY: A History of NHW SA Through Photographs

Around for 36 incredible years, the Neighbourhood Watch SA (NHW) program has been on a fascinating journey!

On this World Photo Day we decided to dig through the archives, finding old photos that help bring that journey to life.

Here’s what we found…

Flinders Park 001, NHW SA’s first group, was officially launched as a pilot at a meeting in the Church of Christ Hall on 1 May 1985.

Two weeks later, on 15 May 1985, the area held its first official meeting at the same venue and elected Mr. Bob McAuley as the inaugural Area Coordinator.

It wasn't long after the launch of the pilot group that community pressure grew with hundreds wanting to expand the NHW program into other suburbs and towns. Senior figures were keen to run the pilot with Flinders Park for at least a year, to ensure the best possible chance of success.

Although the pilot was yet to be completed, in anticipation that its success would encourage a state-wide NHW program, the SA community was busy setting up potential groups and areas. This map appeared in a special lift-out in The Advertiser on Monday 28 April 1986 which shows the planning for new areas. Also appearing in The Advertiser, on 28 April 1986 , was a NHW article by Chris Milne about Flinders Park 001. Although you might find it hard to read, it outlines some interesting facts arising from the pilot that were instrumental in the final decision. The following excerpt says it all:

“The bare statistics are compelling. House break-ins in the area have slumped dramatically, down 30% on the previous 12 months. In two months during the pilot period (which officially ends this week), no break-ins were reported and during the summer school holidays when such crime can escalate, only one break-in was reported.”

Flinders Park 001 set a solid foundation and example for the future of the program and on 5 May 1986, within days of completion of the pilot, Salisbury North 002 was launched and NHW was fully underway in South Australia.

The program was growing from strength to strength and hit 10 years in 1995! 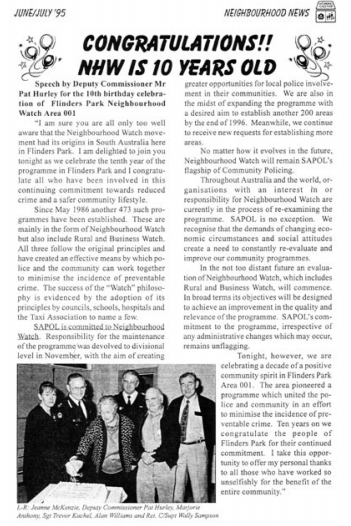 The 1998 Murray Bridge Christmas Pageant saw an entry from Murray Bridge Area 288. The float consisted of a small house which showcased home security issues. Towed behind the community policing car, the float was a head turner. Deputy Koala was part of the action, handing out literature to the waiting crowd. Senior Constable Dallas Daniels and Watchers Michael Swansson, Michael Thorne, Brian Hall and Dick Menz put many hours into producing the incredible float. Wally the watchdog was a mascot adopted by NHW between 2001 and 2003. The character was used to deliver traffic safety messages to school age children. Those of you who were at the 2000 NHW State Conference at the Festival Theatre might remember Wally’s famous introduction when Senior Constable Ashley Slater, in the suit for the first time, missed the steps and fell off of the stage in front of the whole audience! (We can confirm that no dogs or Senior Constables were harmed).

On 4 July 2007 the 600th Neighbourhood Watch group launched in Keith! 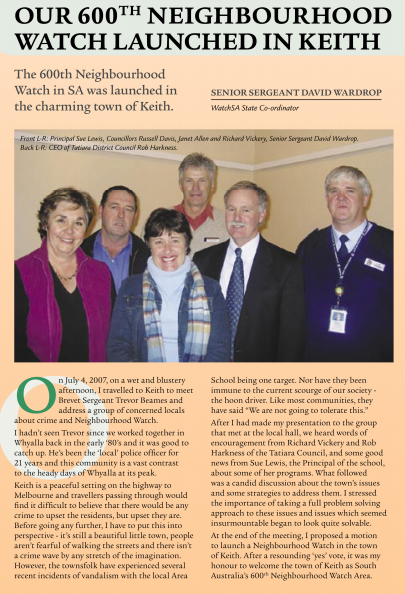 The NHW continues to evolve and grow. With a new and full complement of NHW staff working in SA Police and a proactive board in place, there are some exciting times ahead for the program in SA. The staff and board will look at new and unique ways to ensure the program continues to grow.

Unfortunately, the impact of COVID-19 has disrupted some groups as they haven’t been able to meet face to face. However, this has led to some fantastic adaptations with groups now meeting online. The NHW portfolio attended the NHW International Conference in May 2021. Broadview and Collinswood hosted a community pruning day to celebrate World Environment Day in May 2021. 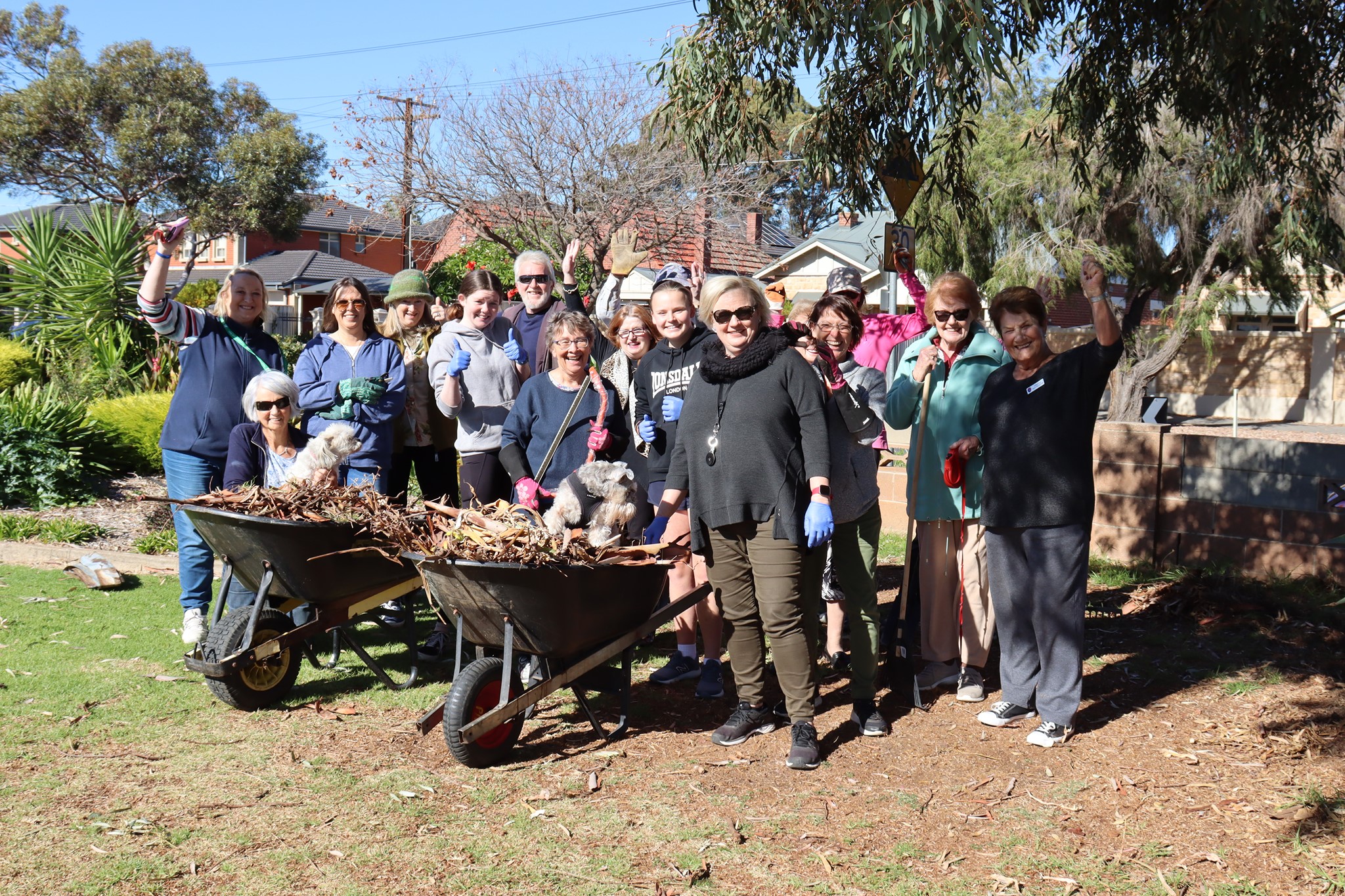 If you’re interested in joining the Neighbourhood Watch SA find your nearest group here and get in touch!

follow us on
Contacts
About Us
What we do
Get Involved
Benefits of Joining
Find an Area
News
What's New
Member's Portal
Safe Living
This work is licenced under a Creative Commons Attribution 4.0 Australia licence. © South Australia Police, Government of South Australia 2021