South Australia Police are urging members of the public to come forward with any information in relation to the 2019 murder of 47-year-old man Oliver Todd.

On the morning of Wednesday 11 December 2019, Murray Bridge Resident Oliver Todd was reported missing from his home at 10am. There were signs of a physical struggle at the address.

At 4:30pm on the same date, Police located the body of a man at Jervois, adjacent to the River Murray, about 15 kilometres South East of Murray Bridge.

The body was later identified as Oliver Todd, and the Major Crime Investigation Branch has since declared his death a murder.

At the same location, Police also found a child’s bicycle which is unusual for the area.

It is believed Oliver Todd was attacked in his home with a tomahawk (a small axe), his body wrapped in a wool bale bag and transported to Jervois in a red Nissan Navara utility with a SA registration of S307AMK.

The tomahawk has not been located.

On Thursday 12 December 2019, a 30-year-old man and a 49-year-old man, both from Murray Bridge, were arrested and charged with murder.

Investigations into the death are continuing and detectives require public assistance.

Police have located closed circuit television recordings of a vehicle they believe to be the car involved.

The recordings show the red vehicle at a Shell service station on Adelaide Road, Murray Bridge at 5:50am on 11 December 2019.

Separate recordings show what Police believe to be the same vehicle on Mulgundawah Road, Murray Bridge, travelling towards the victim’s home in Tenneyson Avenue at about 5:53am.

Police are seeking public assistance to identify the movements of the red Nissan Navara utility on December 11 2019, the history of the child’s bike and the wool bale bag, as well as the location of the tomahawk.

Detective Inspector Billy Thompson from the Major Crime Investigation Branch says the information is vital to the investigation.

“Police are releasing photos of the child’s bike and CCTV footage of the red Navarra in the hope that someone in our community might recognise the bike or that they may have seen the Navarra in the Murray Bridge area on 11 December 2019,” he said.

“We strongly encourage anyone with information to do the right thing and come forward, and you can do so anonymously.”

Anyone with information about this matter is urged to call their local police station or Crime Stoppers on 1800 333 000 or online at www.crimestopperssa.com.au 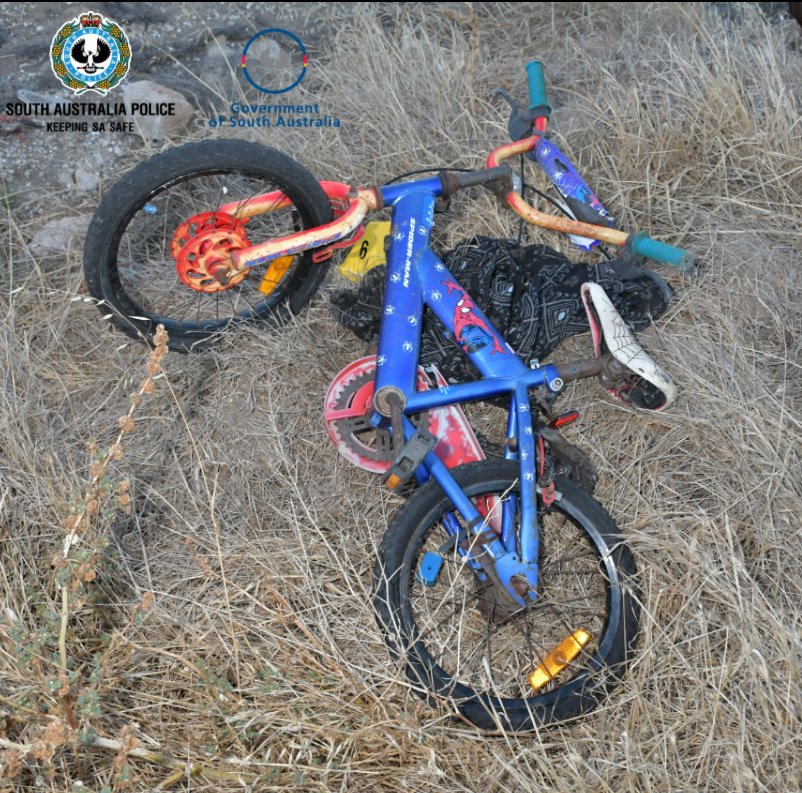